Are you a writer? Are you planning to do a reading or a podcast? Will you be using your published or hopefully-to-be-published text as a part of your presentation?

If so, take a minute to consider what you’re going to be doing and how you’re going to do it. On the what front it’s tempting to take your text (fiction or non-fiction) and use that as your script. I mean, what else would you use, right? Right.

Except…that may not be the best choice in terms of how you connect with your audience. What you’re doing when you give a reading or put a podcast together is presenting your work, but it’s also a performance, and performances have their own requirements. Even if your audience is very nuts-and-bolts about the subject matter, and even if your text is very matter of fact, you still run the risk of presenting your information in a boring way. And boring is generally not good.

Now, I say this not based on personal experience, because I’ve never done a reading, nor do I aspire to do one. I’m actually committed to the idea that writers are not obligated to present or perform their work, and I make a personal distinction between the success of writers who are good writers and writers who are also good performers. Mark Twain (Samuel Clemens) was the first great American novelist, but much of his fame derives from his skills as a performer and personality. Same goes for Will Rogers. And Garrison Keillor. And Truman Capote. And on and on.

To put a point on it, I don’t believe the written word is inherently improved by oratory, or that there’s even any relationship between the two. I don’t believe hearing a human being speak the written word necessarily makes it better or more real or more interesting, or that it helps me connect with those words better than I do when I read them on a page (or screen). I don’t even believe writers should be required to read their work aloud in workshops. And I’m not just basing this on the mind-numbing readings (poetry and prose) that I’ve been to, or the boring lectures I paid to subject myself to in college. I’m basing it on the fact that the written word is not a pale imitation of something else, but rather something to be respected in its own right.

Putting yourself ‘out there’ can have positive effects on publicity and marketing, but it’s your choice. If you’re one of those writers who really does love getting up in front of an audience, then by all means go for it. But do so understanding that you’re doing something other than reading your writing aloud.

So where do I get off giving advice on performance skilz if that’s not something I do myself? First, as someone who has written a fair bit of text that was intended to be spoken by an actor, I have some insight into the difference between words intended to be read and words intended to be performed. And one thing I can tell you for certain is that these two types of words are not the same. Yes, Orson Welles cold make the words on your Wheaties box sound like Shakespeare, but here I’m assuming you’re not the reincarnation of Mr. Welles. (If you are, I would like to be your agent.)

Words that I write which are meant to be read from a page (or screen) will often be different from words that will be spoken or performed, even if those words describe the same narrative event or moment, or line of dialogue. (If you doubt this, take any piece of fiction you’ve ever written and convert it to a stage play or screenplay. I’ll wait.) It’s precisely for this reason that doing a reading or podcast for your meant-to-be-read text may not pay off as well as it otherwise might.

Second, and of considerably more interest to me, there is the very interesting case of a writer named Charles Dickens, and what he did when he gave readings of A Christmas Carol. Because Mr. Dickens knew that the audience seated in the chairs before him was a very different audience indeed from the audience sitting at home reading his books, and he knew that he needed to make allowances for that — even in his original text. 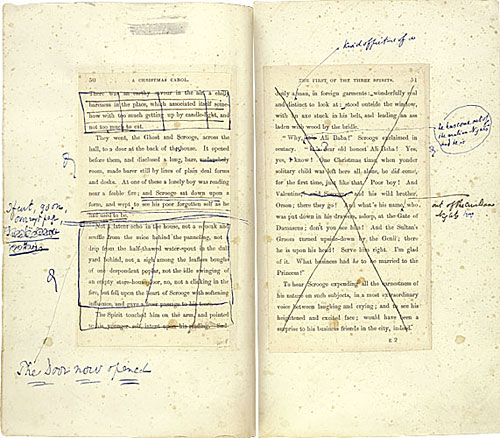 That’s a two-page spread from a truly fascinating book known as the Dickens Prompt Copy, a reproduction of which is available for purchase here. (A complete online version of Dickens’ performance text for A Christmas Carol can be found here. I don’t know if it’s word-for-word the same as the text of the prompt copy.) While you may not be Charles Dickens, and your audiences may not be so large that you’re in danger of inadvertently inventing ticket scalping, the basic premise holds. The work you wrote may not be the work you should read.

If that seems like blasphemy, let me put it in more marketing-friendly terms. The medium(s) that you are going to use for marketing may not actually favor your text. In fact, they may show your text-as-written in an unfavorable light, leading your audience or listeners or viewers to conclude that the work is not for them. What’s great on the page may drop dead on the stage, through no fault of your own, because live, in-person presentations are fundamentally different beasts from recorded events, which are different from the very personal act of reading.

So before flipping open your manuscript or book and reading to your assembled fans, groupies and stalkers, give some thought to Mr. Dickens and his prompt copy. What can you cut or edit out that helps your performance but leaves the spirit of your words intact? Are there passages you can pass over? Are there sections you can summarize with a few words?

I’m not suggesting you write something entirely new, or that you mislead your audience. Rather, like Dickens, I’m suggesting you treat them as an audience and put together a prompt copy of your own work.

Later update: The entire manuscript for Dickens’ A Christmas Carol is now online.