As I’ve noted on several other occasions, and will continue to note in the future, at times there is a disconnect between the publishing industry’s self-aggrandizing rhetoric about protecting the cultural soul of our nation (or any nation for that matter), and its omnipresent and often low-brow efforts to exploit that cultural stewardship for cash. (See also: hypocrisy.)

Here are two quotes from a blog comment I wrote today:

Marketing will always be trying to leverage content for its own ends because it’s in marketing’s best interest to do so.

Maybe in a decade (or two months), when you click a button on your e-reader to look at the next page of your novel, you[‘ll] instead get an interstitial commercial which you cannot bypass.

Before you roll your eyes at this bold prediction — and I say now that some e-reader marketing weasel will implement exactly this type of marketing fail — a brief history lesson is in order. Back in the 70’s, when I was just getting into paperback fiction, I happened to run across a novel that had a card of some kind wedged in the middle of it. Thinking that someone had left a substantial bookmark behind I flipped to the card and attempted to remove it, only to discover that it was bound to the book.

Looking at the card more closely I discovered that it was an ad for a product that would kill me. And no, I’m not kidding: 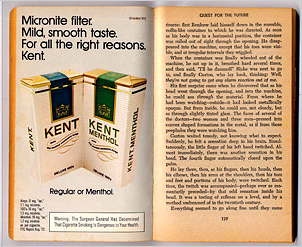 Even today I can still remember my negative response to this intrusion. The idea of inserting an ad in the middle of a book seemed not only pathetic (and all too predictable), it seemed to directly undermine the utility of the product on which the advertising relied. Unlike a t-shirt emblazoned with a product logo, which still functions perfectly well as a shirt, a novel (or even a non-fiction work) ceases to function when it is interrupted by messaging of some other type.

For this historical reason I wasn’t surprised to read earlier this week that e-books and e-readers are already being exploited for marketing purposes before they mature as a medium. Then again, because there really is nothing new under the sun, the coming embrace of revolutionary technological marketing solutions will in fact simply be a digital rehas of previous analog attempts to leverage Product X for the purpose of selling Product Y.

Speaking of which, it’s also worth remembering that we’re not yet a decade on from another revolutionary attempt at selling out the literary medium for marketing purposes. In this case the clever idea was a variation on product placement, where a product is featured in a work of commercial entertainment in exchange for a fee.

…as the New York Times reported on Monday, last year an Italian jewelry firm hired British author Fay Weldon (“The Life and Loves of a She-Devil”) to write a novel that was privately published and given to 750 special clients.

Now, this fall, that novel will go public when “The Bulgari Connection” is published in England and in America (November, Atlantic Monthly Press). And as well-written, witty and wicked as Weldon’s 22nd book may be, its genesis is guaranteed to get even more attention than its literary merit. While Jane Friedman, chief executive of HarperCollins Publishers enthused about the deal to the Times, calling it “fantastic” and saying it has given her “lots of ideas,” not everyone sees literary product placement as a nifty new marketing tool.

What was the author’s take on this nifty new marketing tool?

But she who will be seen as the devil by purists laughs off her critics. Weldon declares, “Product placement or none, this is as good a novel as I’ve ever written.”

Admitting that she probably would have turned down the offer if it had come from the makers of a less prestigious product, such as Wrigley’s Chewing Gum, Weldon said that Bulgari offered her total artistic control and a nice amount of money for three months’ work.

I suppose we all turn into giggling idiots when someone hands us a bag full of money, but equating the contractual obligation to include positive mention of a real-world product with total creative freedom is moronic. To be clear, I don’t have a problem with any writer taking a for-hire gig. If somebody puts five thousand dollars on the table for a riveting novel about the persecution of Holocaust deniers, and you’ve got the kind of soulless mind and cheap-date rate that makes something like that acceptable to you, there’s no law against it. But what you’re doing is not writing a novel. What you’re doing is writing a commercial.

Fortunately, the trend doesn’t seem to have caught on. While good for fifteen minutes of attention, the marketing stunt was apparently perceived as such by others, sparing us all the thrill of mysteries featuring body-part storage solutions by Tupperware. Then again, given how long it’s been since anybody tried something similar, it’s probably time for the same thing to show up in an e-book.