This post is part of Cover Design Week. To see other posts click the CDW tag below.

Here is a large version of the cover of my short story collection, The Year of the Elm (TYOTE): 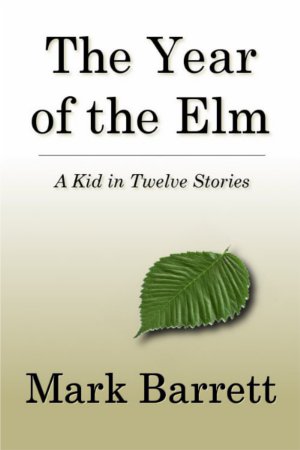 You can see a smaller version in the right-hand column on this page, and on the Smashwords page where the collection is currently being sold. [Book removed 01/03/17.]

One of the few practical things I knew when I set about designing the cover was that the small image would be more important than the large image. The reason was that the cover would almost always be shown as a thumbnail to interested readers, rendering subtleties all but indistinguishable.

For that reason, along with aesthetic reasons I’ll get to momentarily, I decided to make the title of the work and my name clearly visible at almost any size, and to make the composition simple enough that it wouldn’t be corrupted by a reduction in size. Whatever you think about the design, I feel confident I achieved this practical goal. I did have to resign myself to the fact that the subtitle would not be visible at reduced size, but I felt that was an acceptable loss. Whether this calls into question the inclusion of a subtitle I’m still not sure.

Making TYOTE available as a physical, print-on-demand (POD) book presents new issues. I’ll still need a legible small-size/thumbnail image, but now I’ll also want the book-size cover (front and back) to be interesting and effective at communicating the contents. Solving these new practical and artistic problems is part of the reason I’m interested in hiring someone to help me with the redesign. I’ve already given the issues some thought, but I’m not sure how to best accomplish these objectives.

Here are the design goals I had for the initial version of the cover, and my take on whether I accomplished them or not:

* Had I been working with a publisher, and had they refused to use the leaf on the cover, that would have risen to the level of a deal-breaker for me. (No, I’m not kidding.) As I noted in an earlier post about publishing and how authors are often omitted from the cover-design process for their own books, I’m not good with being marginalized when I feel an emotional connection with something. I can’t care and not care.

With all that in mind, here’s what I’m hoping to accomplish by involving someone else in the redesign:

So that’s what I’m thinking. Maybe it’s more thought than any cover (or my cover) deserves, maybe I’m overlooking some obvious issues. I don’t know…which is why, again, it makes sense to look for some help. I don’t have much money to spend, I don’t want to do anything radical, but going from e-book to POD does mean having to deal with a lot of new issues.

Because of some ongoing tech problems (my main computer died and I had to order a new motherboard) I’m going to get this done later than I wanted to, but that seems to be the pace of things for me these days. In any case, I’ll follow up and let you know how it goes.