All of these definitions are unhelpful at best, self-serving at worst. In order to talk about self-publishing with any legitimacy we need a way to differentiate among self-publishers that is meaningful and objective. For that reason I created the Ditchwalk Self-Publishing Scale, which uses rising levels of production complexity to categorize self-published authors.

Patrice Writes A Book
To see the Ditchwalk Scale in action, we’ll follow a writer named Patrice as she transitions from category to category, cutting a self-publishing swath deep into the heart of the publishing industry.

Reality Check
Here are the main points of the Ditchwalk Scale condensed into a handy table: 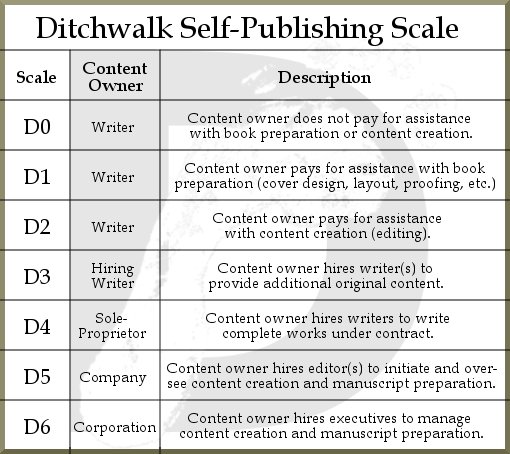 No matter how you approach the question of what it means to be published, the only thing that actually matters is that the publisher — the actual legal entity that produces the book — is separate from you. If you write a book and somebody else produces/manufactures that book (without charging you up-front money, which would make them a vanity/subsidy press) then you’re a published author, not a self-published author. On the other hand, if you create the contents and you make the book, then you’re self-published, no matter how complex ‘you’ as a legal or business entity may be.

The Assumption of Authorship
Implicit in the idea of publishing and self-publishing is the question of authorship. Because a writer is usually credited on the cover of a book, authorship is often assumed even when it’s not an accurate description of the writer’s role on a project. When you see “Ernest Hemingway” on the cover of “The Old Man and the Sea”, you can reasonably assume that Hemingway was the author of that title. But when you see “Suzy Silly” on the cover of “The Cretin’s Guide to Calico”, it’s not necessarily the case that Suzy is the author of the book, even if she wrote most of the contents.

Why? Because authorship is defined by the creation and ownership of a work. If you’re the writer of a work but you don’t own that work then the question of authorship becomes murky. Conversely, a writer who self-publishes an original work is unambiguously the author because that writer both created and owns that work.

The common assumption about traditional publishing is that a writer writes a book which is then submitted to various publishers for consideration. If a publisher likes the work a financial deal is struck in which the original writer retains all rights of authorship because they originated and executed the idea.

Anyone who has a passing familiarity with the publishing industry knows there are many projects which do not meet this test of independent authorship. For example, who is the author of A Shore Thing? Is it Nicole “Snooki” Polizzi? Is it ghostwriter/collaborator Valerie Frankel? Is it the agent, editor and/or publisher who pitched and brokered the deal? Who had final editorial control over the book? Who owns the contents? Any of the above? Does it even make sense to talk of authorship in cases like this?

To be clear: if you write a book and someone agrees to publish it on the condition that you make specific changes, you’re still the author when that book comes out. Why? Because you signed off on those changes, even if you sold your soul in doing so. (You could have refused to make the changes, rejected the contract and still retained ownership of the work.)

On the other hand, if you’re hired to write a book, and you can be told to make changes, and you can be fired if you refuse or fail, then I don’t think you’re the author of that book. Your name may be on the book as the writer, and you may claim authorship in your bio, and you may be able to defend that claim because nobody else wrote the words in the book, but relative to someone who creates and executes an original idea themselves, I think it’s clear that your contribution is less. Throw in the test of ownership and I think the issue is decided.

In-House Self-Publishing
If you’ve spent any time observing the publishing industry you’ve inevitably heard a project described as in-house — meaning it was initiated by an editor or someone in management at the publishing company that produced the work. No matter who the publisher hires to write the words for an in-house title, is not the admission that something was developed in-house proof that such works are literally self-published?

To see what I mean, here are the three possible publishing relationships that can exist between writer and publisher:

If a writer can self-publish a book even after hiring a cover designer, proofreader, designer, editor, marketer, publicist, accountant, tax lawyer, estate lawyer and chauffeur, how does merely hiring a writer (or ghostwriter) shelter a publisher from the charge of self-publishing if the publisher controls and owns all aspects of the resulting work? Isn’t that the very definition of self-publishing — albeit abstracted in both a business context and as a collaborative process?

What the Ditchwalk Scale shows is that when the owner of a title hires others to write all or part of the contents under contract, and that same owner also manufactures the resulting work, that person does not get to claim that the work was published by that business. Rather, the work was, by definition, self-published.

Self-Publishing for All
What publishers have been saying as long as publishers have been in existence is that creating and self-publishing books is okay for them, but not okay for you. Yet hiring others to do work on a title doesn’t determine whether a work is published or self-published. The only thing that matters is whether publication is bankrolled by the content owner or by a separate business.

By that definition, many of the books published around the world are self-published by publishers in exactly the same way that independent authors are now self-publishing their own work. The only difference is a difference in scale.