Writing is a solitary pursuit often requiring long periods of self-imposed isolation in order to complete a given work. Whether the end product is a book, script or blood-scrawled scroll, many writers compensate for the inherent loneliness of authorship by leading bawdy social lives centered around chemical binges and chaotic if not ultimately destructive relationships. While I fully support any writer’s determination to find a healthy work-life balance, not all writers are constitutionally inclined to such interstitial exuberance.

If you live a fairly quiet life, as I do, the time you spend writing may not seem all that different from the time you spend staring at the wall, flipping channels, surfing the web, or leaning on the open door of the refrigerator for the fourth time in twenty minutes. Such mind-numbing activities may actually increase the appeal of the writing process, turning each typo and turn of phrase into the most galvanizing thing that has ever happened to you, but the banality of such an existence presents a problem. Where more outgoing writers survive secluded toil by subsisting on memories of social conquests and defeats, or even pending legal action, mild-mannered types are at serious risk of cerebral whiteout, where the isolation necessary for work merges indistinguishably with the vapidity of down time.

While it is possible for introverted writers to break up the monotony of their non-writing life by engaging in socially acceptable forms of self-abuse like exercise or watching the news, the real problem with being a low-key person in a low-key profession is that it’s often hard to find motivations that can withstand the darkest hours of the writing process. Where your more socially engaged writer always has an intellectual foe they’re determined to prove wrong or embarrass, or a object of fancy they aim to seduce with the words flowing from their fingertips, the loner writer (not to be confused with the antisocial writer) often struggles to remember why they’re subjecting themselves to torment when they could just as easily be staring at a crack in the ceiling.

From time to time I confess such thoughts have occurred to me when I’ve been writing longer works, and particularly when I’ve been writing longer works that spiral out of control, take on a life of their own, then turn on me with long, thorny, poison-tipped tentacles. (This doesn’t happen a lot, but believe me, once is more than enough to leave a lasting impression.) In such instances it obviously helps to be able to maintain a connection with one’s overarching goals while things sort themselves out.

Where outgoing writers can count on being motivated by angry calls from editors, bitter social-media battles or megalomaniacal dreams of celebrity, I’ve learned over the years that nothing makes me feel a greater sense of accomplishment than piling up a big page count, even if most of those pages will ultimately need to be revised, if not excised. Whatever your level of skill, and whatever your personal and professional objectives, writing a hundred pages feels like a big deal. Except, as every college student knows, for the fact that page counts can easily be manipulated. A little margin padding here, a little line-break padding there, and voila, that six-hundred word plagiarized essay suddenly becomes a robust twenty-page paper suitable for sale to next year’s students.

Having begun my writing aspirations at the end of the typewriter era I still have a tendency to think in terms of page count. As every computer geek and anyone under the age of forty knows, however, the best literary metric is word count, because word count defines the amount of writing produced rather that its length — unless you’re writing in German, in which case it defines both. Back in the pre-computer publishing era (1440–1972) word count was critical to professions like journalism, but it was often calculated by multiplying the number of double-spaced typed pages by an assumed average of 250 words per page — meaning no actual total was ever calculated. Not surprisingly, journalists were just as good at fudging words counts as students were at fudging page counts. (The first known case of page-count fudging involved an enterprising young reporter named Johannes Guttenberg, who contracted on the side to publish a version of the Bible at a per-page price, then padded out the gig by using massive bottom margins no modern-day undergrad would dream of trying to get away with.)

Today, most word-processing programs provide the exact word count for any document at the click of a button. But because computer geeks love data almost as much as they love caffeine, these word-count functions often return additional obscure metrics that can, in the hands of a suitably introverted writer, be used as motivation to keep plugging away. While I’m obviously not a word-count expert, in my admittedly limited and subjective experience no word-count metric is more fun to pursue and more exhilarating to achieve than passing the one-million-character mark on a single project. I’ve done it more than once, and let me tell you, it’s thrilling every time.

Here’s the latest example, from a great tentacled work that still has me in its clutches: 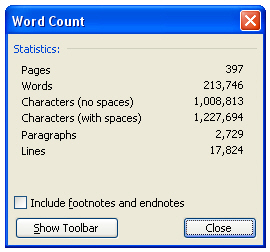 I obviously can’t lay official claim to any more key presses than the word-count report indicates, but I am in fact a poor typist, and also tend to revise sentences on the fly over and over again until they have the right feel. So any document of mine that shows a million key presses probably represents, conservatively, something closer to sixteen million.

How can any writer not be happy with a million characters typed, let alone written, assuming those characters do in fact form words and sentences, as mine aspire to do? Yes, I have to revise all those characters, and edit them, and proofread them if I’m not blind by then, but that’s all unimaginably far down the road. Right now I’ve got one million characters in the bank and I’m reasonably confident that at least a third of them are probably worth keeping.

And today that’s enough to convince me I shouldn’t give up just yet.

«   Interactive Entertainment and Detached Eddies  |   The Kindle as Medium   »