Home > Writing > The Importance of Technique

This is acrylic paint on a canvas: 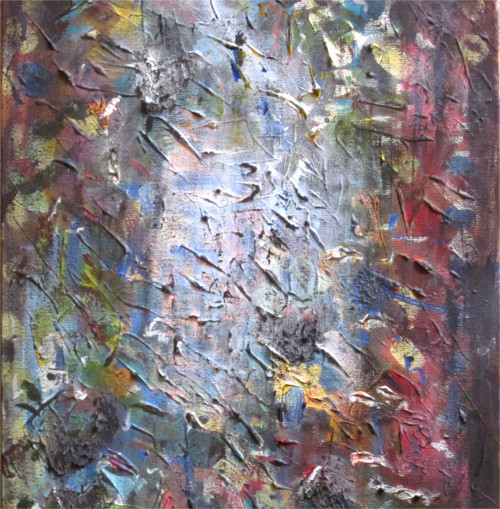 While that aggregation of paint probably meets the definition of art in some way, and by virtue of its constituent parts is perhaps also a painting in some sense, relative to my intent it is neither. Rather, what that canvas represents is a variety of painting techniques I have tried over the past few months as a byproduct of exploring that medium.

Each time I work on a painting, which I tend to do in small pulses rather than sustained pushes, I take any paint I have left over and the brushes I’ve been using and I apply the paint to that canvas in various ways. Sometimes I work in a directed fashion, trying out a technique I’ve read about in a book or learned about online, sometimes I act impulsively or instinctively, but the goal in all cases is to explore and learn. And I’m learning.

Because a canvas can be apprehended at a single glance it’s much easier to see how individual techniques add up to both a whole and to an arsenal that can be used in future works, but the same applies to writing. The more you explore what you can do with words, and the more you learn how you yourself approach language and writing, the more likely it becomes that you will be able to realize the works you envision.

It may seem problematic to compare images and ideas because words are more logically connected than paint, but I mean the above image to be a direct analogy. That canvas is to painting what a notebook is — or should be — to writing. You are not obligated to practice techniques in the context of a coherent whole when you write any more than when you paint. Write a sentence fragment if that’s where your head’s at. Note an interesting detail, then express that detail in different ways. Write a single sentence that appeals to you, then rewrite it twenty times by adding or removing a single word and changing the order of the other words. What works? What’s muddy and dull, what’s clear and sharp?

Whether you write fiction or nonfiction, comedy or drama, the power of your work comes not from conception but from the techniques you employ. If you can be funny or incisive or searing in fifty words then it probably won’t be hard to write five hundred in the same vein, but the reverse is not true. That’s the importance of technique in any medium.