A new threaded post on this topic can be found here. For previous posts about the Harreld hire, click the tag below.

10/24/20 — Following up on the discrimination lawsuit that will inevitably be filed against the University of Iowa by eight former football players, which we dealt with at length in the update just below, this article by Chad Emmert at Hawk Central is a good rundown of the fix UI is in: Threatened lawsuit poses pivotal moment for University of Iowa football, experts say, with no pain-free way out.

If the university agrees to a settlement, it would be viewed by the public as an admission of guilt and would likely spur similar lawsuits from former players, said two legal experts who reviewed documents about the potential case at the Register’s request. But allowing the matter to go to trial would potentially put Ferentz and his program under a cloud of doubt for months, making it difficult to recruit Black athletes and leading to depositions and cross-examinations of him and his coaching staff that could prove embarrassing.

Either path the university takes must include a further commitment to real change in the way Black athletes are treated, the experts said, or the reputations of Ferentz, Barta and any others involved will be damaged permanently.

After five years of mutual dereliction, disregard and ass kissing by illegitimate UI president J. Bruce Harreld and UI Athletic Director Gary Barta, the university as an institution is suddenly weaving concerns about diversity, equity and inclusion (DEI) into every aspect of its messaging, including outright lying. For example, over the past year there have been multiple attempts to claim that diversity is one of the core concerns of the current UI Strategic Plan, when it is objectively not. From an Iowa Now article on 06/25/20, written by the UI Office of Strategic Lying:

As regular readers know, and as the following screenshot attests, there are three main pillars to the current UI Strategic Plan, and diversity is not one of them. 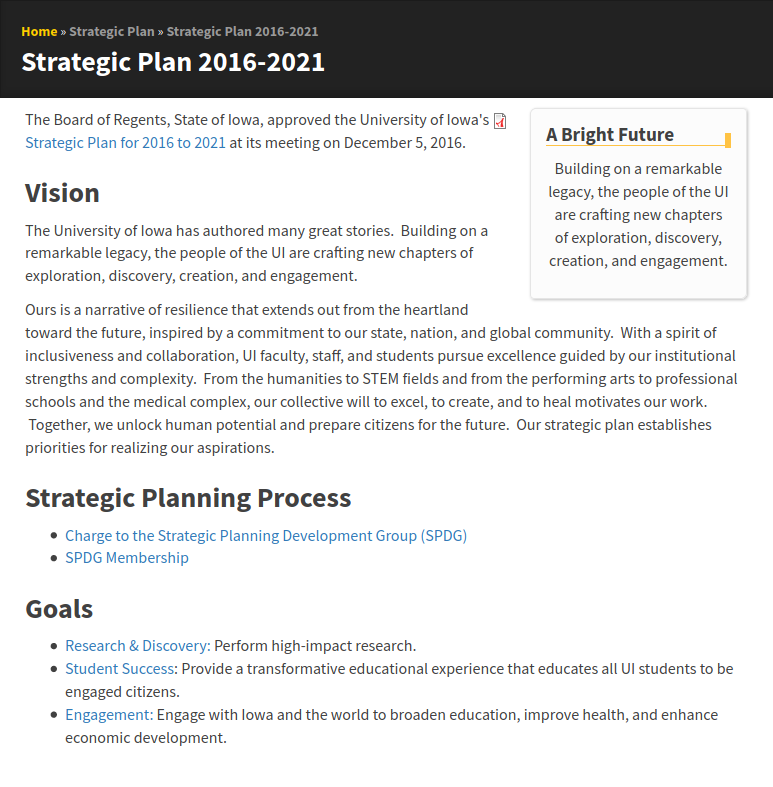 But hey — when you’re in a white-hot panic because you precipitated your own discrimination disaster in the same year that the Minneapolis police choked the life out of George Floyd, maybe you can be excused for trying to lie your way out of your troubles, right? Except…when you think about it, that’s pretty much how the University of Iowa got into this mess in the first place, so maybe it would be better to own up to these problems, clean house, then get on with the business of actually being a good governmental citizen instead of faking it. Unfortunately, as just noted, J. Bruce Harreld and AD Barta have a particularly incestuous administrative relationship, in which they express mutual respect for each other while never holding anyone accountable for anything. That includes, particularly, Harreld offering slavish support even after Barta cost the university $6.5M in a gender discrimination lawsuit, at the same time that Harreld was kicking the DEI administrator out of his cabinet and out of the president’s office.   END_OF_DOCUMENT_TOKEN_TO_BE_REPLACED

A new threaded post on this topic can be found here. For previous posts about the Harreld hire, click the tag below.

09/25/20 — The big news this week — at least so far — concerns the recent murder of four University of Iowa athletic programs by illegitimate UI president J. Bruce Harreld and Athletic Director Gary Barta. For two reasons, however, I will be tackling (hahaha) that complicated narrative this weekend. First, reporting is still coming in about events that transpired over the past few days, and I don’t want to jump the gun (ha). Second, I don’t want the following news to get lost in the mix, which would certainly happen if I dove (ha) into the deep end (hoho) of that sports story (I’ll stop now).

As I have mentioned in the past, one of my biggest concerns about the pandemic is that idiots in positions of leadership might take University of Iowa Hospitals and Clinics for granted, and in so doing swamp the biggest and best medical center in Iowa. Speaking of which, on Wednesday we got this report from the Gazette’s Vanessa Miller: Sicker patients now packing University of Iowa hospitals.

Because UIHC is accepting only the transfers it can handle, “many hospitals across the state are disappointed when we decline to take a transfer, and many have complained to me because they believe it is happening at a higher rate than it did before.

“That’s not the case,” Gunasekaran said. “It’s that we have sicker patients now than we did before.”

When asked why patient are sicker now, Gunasekaran surmised the answer might be twofold.

“One is that there is going to be a public health impact to delaying health care for three months,” he said. “I think a lot of chronic diseases didn’t get managed as well as they could, and they progressed to a different state.”

Secondly, many other hospitals don’t have the ability to handle the sicker patients.

It isn’t only intra-state transfers that are becoming a problem however. This in particular is a massive red flag for Johnson County:

“We’ve had two months of the worst left-without-being-seen rate in our emergency department since I’ve been here,” Gunasekaran told the regents. “I regret to tell you that in the month of August, 20 percent of patients left without being seen, which has never happened.”

Typically, on the worst day, that rate is between 7 and 10 percent.

As to why this is happening, there is no secret. Iowa’s governor prioritizes revenue generation on par with the literal lives of Iowans, and that means she is keeping cases, hospitalizations and deaths higher than they should be. As Iowa’s medical professionals have become better at keeping people alive, however, patients are no longer dying off at the same rate, thus clogging the state hospital system with patients that Governor Reynolds was killing outright only a few months ago. Unfortunately, because there is no chance that Demon Kim will change her money-grubbing ways, she may very well overwhelm UIHC just as the flu season picks up, and more COVID-19 cases are generated from decreased social distancing in the cold months.   END_OF_DOCUMENT_TOKEN_TO_BE_REPLACED