I found Joleene Naylor while searching for a cover designer for the POD version of my short story collection, The Year of the Elm. As I’ve said many times, the best thing about the internet is that it’s possible for anyone to connect with anyone no matter where they are. Despite this insight, however, I still tend to assume that 99.724% of all people on the interwebs are curled up in an overstuffed chair at an urban coffee shop, wirelessly transacting their way to hipster happiness.

You can imagine, then, that the following line in Joleene’s bio caught my eye:

She grew up in southwest Iowa surrounded by corn and very little entertainment — so she made her own.

As regular readers know, I grew up in Iowa myself. As regular readers also know, The Year of the Elm is about a boy growing up in a small town in Iowa where there isn’t a lot of entertainment, so as often as not he has to make his own.   END_OF_DOCUMENT_TOKEN_TO_BE_REPLACED

Having had the smarts to avail myself of the experience, insight, technical skill and patience of designer Joleene Naylor, I now have a cover for the print-on-demand (POD) version of my short story collection, The Year of the Elm. I’m not only satisfied with the result, I’m thankful I didn’t have to produce it on my own. Whatever time it might have taken to do it myself, and however much I might have learned along the way, I wouldn’t have been able to replicate the give-and-take that helped us arrive at the solution you see here. 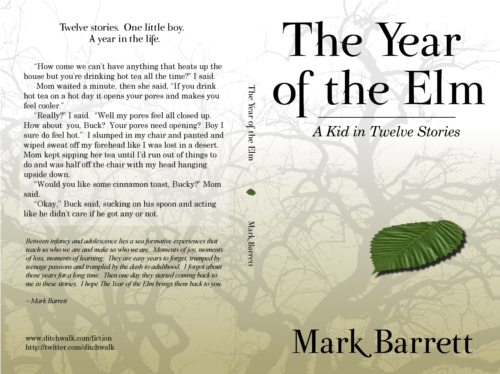 All of the issues I wanted to deal with or resolve have been dealt with or resolved. The look of the POD cover is an evolution of the original e-book cover, but it also speaks more directly (albeit suggestively) to the contents of the stories. I can’t help but feel that it’s an improvement.

Total cost for all of the advice, artistic input, technical wizardry and plain old common sense that Joleene provided: $50.   END_OF_DOCUMENT_TOKEN_TO_BE_REPLACED