Not everything is worthy of true indignation, though it is admittedly easy to get lost in an argument and forget that what you’re talking about is meaningless. So next time you think you may have lost your bearings, or you’re not sure if flaming someone for their opinion about an espresso machine is appropriate, take a deep breath and consult the Ditchwalk Indignation Scale: 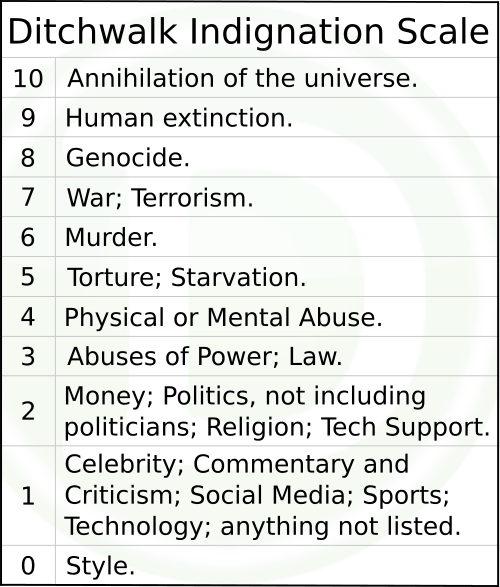 Practically speaking, the benefit of the Ditchwalk Indignation Scale is to remind us all that when we’re arguing about a 1 — which is pretty much all we ever argue about — we’re arguing about a 1. In fact, you can even use that point to express your righteous indignation. For example: “I’m sorry, but I have more important things to do with my time than argue about a 1.” At which point the other person may slug, you, allowing you to continue your discussion on a more substantive basis.

All of these definitions are unhelpful at best, self-serving at worst. In order to talk about self-publishing with any legitimacy we need a way to differentiate among self-publishers that is meaningful and objective. For that reason I created the Ditchwalk Self-Publishing Scale, which uses rising levels of production complexity to categorize self-published authors.   END_OF_DOCUMENT_TOKEN_TO_BE_REPLACED

A couple of weeks ago I was compelled to open the case on my balky computer and dig into its guts. My goal was diagnosing a long-running and progressively worsening series of program crashes and operating-system reboots, all of which were crimping my productivity and putting my data at risk.

It took more hours than I would have liked, but in the end I had my culprit: a bad stick of DDR2 memory, now upgraded and replaced. Along the way I also updated the BIOS for my computer, stress-tested and reconfigured various bits of hardware and software, and killed several trojans and a dormant worm.

I am now suffering no computer ills. My machine is running like an electronic top. I’m confident going forward that I have a stable platform from which to work, and that’s no small comfort given that I hope to do a great deal of writing over the next nine months. My computer is, after all, my workshop, and I don’t need a workshop that blinks out at random intervals.

Optimus Perfecticus
While diagnosing my computer problems I ran a series of tests, including MemTest86+ — which proved decisive. In order to run that program I had to download and install it, which I was able to do after a couple of faltering attempts to decipher the geek-speak instructions.

While performing this relatively simple task I found myself confronting an age-old debate that seems almost generic to human existence:

The answer, always, is found at the intersection of time and money. How much will it cost, and how long will it take, either to pay someone to solve the problem or to do it yourself? (Here I’m assuming that the goal is not one of self-satisfaction, but simply solving a problem by the most effective means.)   END_OF_DOCUMENT_TOKEN_TO_BE_REPLACED

My main curiosity about Morrowind was whether the large scale of the world translated into greater immersion or greater tedium during play. Having played it extensively for close to a month I think I can say without equivocation that in this case more is more. Unlike any game I can think of, wandering around in Morrowind and bashing things for experience points gave me a real sense of place, and created an equivalent-sized mental space in my mind. Even better, I interpreted this space not just as distance, but as depth of setting.

Here are some of the things that I think helped create that effect:

In fact, I got so wrapped up in just wandering and experiencing the world that I let much of the plotted story slip for a quite a while. When I finally got around to pursuing the story, the mechanics of language interaction that the plotting hinged on actually seemed constraining, and made the world less enjoyable. At one point I was forced into an action that I didn’t want to take because of the limited number of choices available to me, and it was only at that point that I really felt like the world broke down. I stopped playing soon after, but I do intend to begin a new game in order to experience the story the designers intended to tell.

The moral of the story, if there is one, is that Morrowind does an excellent job of simulated an interesting fictional space, and that that in itself was compelling for me.